Facing Criminal Charges?
You’ve Come to the Right Place. Whether You’ve Made a Mistake or Have Been Falsely Accused, I Can Help Resolve Your Matter so You Can Move on With Your Life as Painlessly as Possible.
Get My Free Case Strategy Session
Home
Practice Areas
Criminal Defense
Theft Crimes
Auto Theft Carjacking 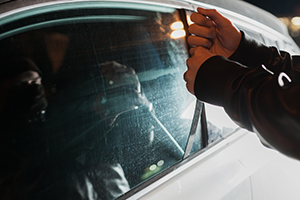 Carjacking is a serious theft crime that generally involves the forcible taking of a motor vehicle from another individual. The penalties for a conviction of this crime can be severe and result in extensive jail or prison sentences, a potentially permanent criminal record and steep fines. Additionally, if a weapon is used in the commission of the carjacking, the penalties can be drastically enhanced.

If you have been charged with carjacking or auto theft throughout Jacksonville, it is important to contact an experienced criminal defense lawyer in northeast Florida to begin crafting your best defense. Mitigating factors or defenses to your alleged crime may be available to have your charges reduced or even dismissed.

If you have been charged with carjacking in Jacksonville, or any of the surrounding areas in Florida, including Jacksonville Beach, St. Augustine, Orange Park, Fernandina Beach, Neptune Beach, Atlantic Beach, St. Augustine Beach, Green Cove Springs or Keystone Heights, contact Roelke Law today. Bill Roelke is an aggressive criminal defense lawyer who is knowledgeable in all areas of Florida’s theft crimes and will make every effort to fight the allegations against you. Call Roelke Law today for a free consultation at (904) 354-0333 about your alleged auto theft charges.

According to Fla. Stat. § 812.133, an individual can be charged with carjacking or auto theft if they intentionally take another person's motor vehicle, and during the commission of the offense they use force, assault, violence or intimidation against the motor vehicle's owner.

An offense related to auto theft or carjacking is the operation of a chop shop. Under Florida law, a chop shop can include any area, building, storage lot, field or other premises where the altering, dismantling or reassembling of stolen motor vehicles takes place. Additionally, any major component parts of two or more stolen vehicles that are found in these same place can be considered a chop shop.

A major component part is defined as any part of the car, including the motor, bumper, wheels, fender or transmission.

An individual who knowingly operates a chop shop can be convicted of a felony of the third degree offense, which is punishable by up to five years in prison and/or a fine up to $5,000, according to Fla. Stat. § 812.16.

Additionally, an individual convicted of operating a chop shop may be required to pay restitution to anyone whose property was stolen and used in the chop shop.

The penalties for a carjacking conviction can vary, depending on whether a gun or other deadly weapon was used when the offense was committed.

If a gun or other deadly weapon was used during the offense, the alleged offender can be convicted of a felony of the first degree, which, in this case, is punishable by life imprisonment and/or a fine up to $10,000, under Fla. Stat. § 812.133(2)(a).

Additional Penalties for a Convicted Felon in Florida

Carjacking is considered a serious felony offense in Florida, and if an individual is convicted of the carjacking or auto theft offense, they can be forced to face the harsh repercussions of living as a convicted felon in the United States. A convicted felon in the United States can be restricted from voting, owning or possessing a firearm, enlisting in the military, or holding public office. Additionally, as a convicted felon in Florida, the individual may be required to register with the sheriff of the county they reside in, and be photographed and fingerprinted, as stated in Fla. Stat. § 775.13.

Contact Roelke Law today for a consultation about your carjacking crime throughout Duval County in Florida. Bill Roelke is an experienced Jacksonville theft crime lawyer who will defend you against the harsh penalties and repercussions of your alleged carjacking offense. Contact Roelke Law at (904) 354-0333 or send an online message for a consultation about your alleged carjacking offense throughout Duval County and the surrounding counties in Florida, including St. Johns County, Nassau County and Clay County.