Facing Criminal Charges?
You’ve Come to the Right Place. Whether You’ve Made a Mistake or Have Been Falsely Accused, I Can Help Resolve Your Matter so You Can Move on With Your Life as Painlessly as Possible.
Get My Free Case Strategy Session
Home
Practice Areas
Criminal Defense
Drug / Narcotics Crimes
Possession of a Controlled Substance

Possession of a Controlled Substance 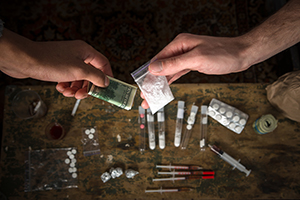 A drug possession conviction in Florida can drastically change a person’s life. Drug possession charges can result in jail sentences, job loss, inability to drive due to license suspensions and large fines.

Although facing these harsh circumstances can seem overwhelming, you don’t have to handle them alone. You have the right to defend your name and reputation through the help and assistance of an experienced criminal defense attorney.

In order to explore the best options to avoid any loss of freedom, contact Roelke Law today for a free consultation at (904) 354-0333 if you are facing drug, narcotics or controlled subtance possession allegations throughout the areas of Jacksonville, Saint Augustine, Fernandina Beach and Orange Park in Florida.

Definition of a Controlled Substance in Florida

Florida follows a drug schedule that is defined in the Florida Comprehensive Drug Abuse Prevention and Control Act. A drug schedule is a system that classifies narcotics, substances, drugs and chemicals from the least addictive with commonly used medical purposes to the most addictive with no known medical use. The list of these substances includes illegal drugs, street drugs, chemicals, narcotics, stimulants and prescription medications.

Some examples of these drugs are:

Possession of a Controlled Substance Under Florida Law

Section 893.13 of the Florida Statutes states that it is unlawful for an individual to be in actual or constructive possession of a controlled substance unless it is obtained by a prescription from a doctor.

Possession is an essential element to a drug possession offense the prosecution must prove beyond a reasonable doubt in order to convict the individual. When determining possession, the prosecution will attempt to prove the alleged offender had either actual or constructive possession.

Constructive possession usually means an individual was aware that the drug was in their presence, they had the intent to possess the drug, and they had the ability to take control of the drug. This type of possession is usually much harder for the prosecution to prove.

Penalties of Possession of a Controlled Substance in Jacksonville

A conviction for possession of a controlled substance is generally considered a felony of the third degree, which is punishable by a sentence of up to five years in a Florida state prison and/or a fine up to $5,000 under Fla. Stat. § 775.082 and .083.

Under Fla. Stat. § 775.084, if an individual who is convicted of a felony of the third degree drug possession offense is considered a repeat felony offender by the court because they have previously been convicted of one or more felony offenses, they can face an enhanced  prison sentence up to 10 years in a Florida state prison.

The Duval County Drug Court is designed to help first time drug offenders avoid a future pattern of drug abuse and arrest for crimes resulting from drug abuse. The Drug Court focuses on treatment and targets individuals whose criminal activities arise from substance abuse. Upon successful completion of the program, an individual may be eligible to have their drug possession charges dismissed.

Key components of the program include:

Under Fla. Stat. 775.13, an individual who is considered a convicted felony offender in Florida is required to register with the county sheriff within 48 hours of entering any county. The registration requires an individual to be fingerprinted, photographed and to provide information, such as the crime committed, place of conviction, name, aliases, address and occupation.

Additionally, an individual who is considered a convicted felony offender in the United States is restricted from owning or possessing a firearm, voting, holding certain jobs and/or being eligible for government aid.

If you have been arrested for a drug possession charge throughought Florida, including Duval County and the surrounding areas of St. Johns County, Nassau County and Clay County, contact Roelke Law today. Bill Roelke is an experienced Jacksonville drug defense lawyer who may be able to help you avoid any loss to your freedom arising from a drug possession conviction. Contact Roelke Law today for a free consultation at (904) 354-0333 or send an online message.