Facing Criminal Charges?
You’ve Come to the Right Place. Whether You’ve Made a Mistake or Have Been Falsely Accused, I Can Help Resolve Your Matter so You Can Move on With Your Life as Painlessly as Possible.
Get My Free Case Strategy Session
Home
Practice Areas
Criminal Defense
Theft Crimes
Shoplifting Retail Theft 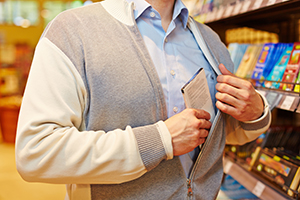 Shoplifting, retail theft, petty theft, petit theft or grand theft charges can stem from a variety of situations, such as:

Retail theft charges can arise from a number of situations, and often the alleged offender did not intentionally steal from the store or intend to keep the item they allegedly stole. Unfortunately, even if the individual did not intend to commit a shoplifting offense, they can still face severe penalties and punishments, such as jail or prison time, restitution, fines and/or a criminal record.

Many employers will not consider a job applicant for certain positions if they have been convicted of a crime involving dishonesty, such as theft or fraud, even if the crime was a misdemeanor offense. Additionally, offenses involving moral turpitude, like theft, will likely prevent an individual from being accepted into many colleges and graduate school programs.

If you have been charged with shoplifting in Jacksonville, or any of the surrounding areas in Florida, including Jacksonville Beach, St. Augustine, Orange Park, or Fernandina Beach, contact Roelke Law, P.A. Bill Roelke is an experienced criminal defense attorney who will make every effort to identify mitigating factors or defenses to your shoplifting allegations. Call Roelke Law today for a free consultation at (904) 354-0333 about your alleged shoplifting offense.

Retail Theft (Shoplifting) – Fla. Stat. § 812.015 - An individual can be charged with this offense if they take possession of a store’s merchandise, property or money that belongs to the store with the intent to deprive the merchant of the retail value, benefit, possession or use of the item.

An individual can be charged with shoplifting in Jacksonville if they take items from any store, such as Wal-Mart, Sears, Target, Stein Mart, Regency Square Mall, Dillard’s and American Eagle Outfitters. Shoplifting charges can also arise when an individual alters, changes or removes price labels or tags on merchandise, transfer items from one package to another or takes a shopping cart from a store. Additionally, if an individual possesses any item that removes anti-shoplifting devices without being in lawful possession, they can be charged with a criminal theft offense.

Petit Theft – Fla. Stat. § 812.014 - An individual can be charged with petit theft in Jacksonville if the item of the stolen merchandise is less than $300. This type of theft can be in the first or second degree.

Grand Theft – Fla. Stat. § 812.014 - An individual can be charged with this offense if the stolen item is $300 or more. This offense can be in the first, second or third degree and can also be any theft that is not petit theft.

The state prosecutor has the burden of proving the alleged offender was guilty of every element to their theft or shoplifting offense beyond a reasonable doubt. Although this is a difficult burden to meet, prosecutors will use the following evidence to prove their theft case:

An individual who has been charged with shoplifting or retail theft in Jacksonville can face various penalties, depending on the amount the alleged offender stole and whether they have any previous convictions. The following are the suggested statutory penalties for retail theft and shoplifting offenses:

In addition to the preceding penalties, an individual who has been convicted of a shoplifting offense may be subject to:

Many counties in Florida offer diversion programs where first time shoplifting offenders are required to attend shoplifting prevent classes, pay courts costs and fees and participate in community service instead of facing a jail sentence.

Contact Roelke Law today for a consultation about your alleged shoplifting offense throughout Duval County in Florida. Bill Roelke is an experienced Jacksonville theft lawyer who will make every effort to help you avoid the most serious penalties and repercussions to the allegations you are facing. Contact Roelke Law at (904) 354-0333 for a consultation about your theft crimes throughout Duval County and the surrounding counties in Florida, including St. Johns County, Nassau County and Clay County.